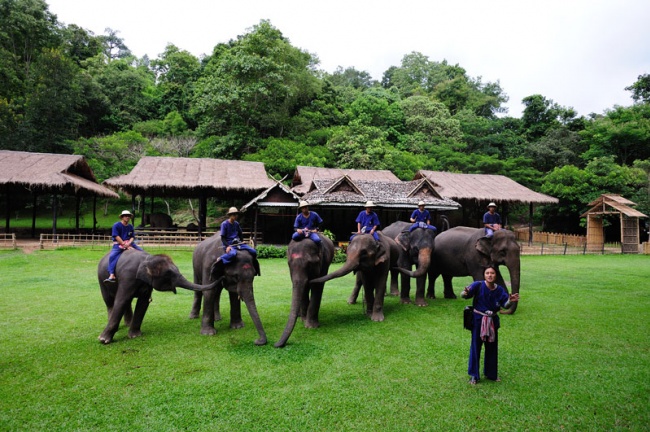 The African Elephants.
• Small head, big ears.
• Taller than the asian elephant.
• There’re 5 tons for the big ones.
• The end of the trunk likes a square with 2 fingers tips.
• There’re 4 nalils
• Both male and fermale has a tusk.

The Asian Elephant.
• Big head, small ears.
• Smaller than the african elephant.
• Thare’re 4 tons for the big ones.
• The end of the trunk likes a triangle with one fingertips.
• There’re 5 nails.
• Only the bull (male elephant) has a tusk.

Female elephant can have only 3 or 4 baby in their lifetime because one baby elephant takes 22 months (almost 2 years.) to prognant. The new born baby’s about 100 kgs. With 70cms to 1m. tall. By nature mummy elephant has to choose her close friend to be “ Mid-wife” to help her during the birth. Just in case mummy elephant gets sick or die. The mid-wife will look after the baby. So their social is also like the hurman being. The new born has to stay with its mom for 1 or 2 years. During the first day until 5 or 6 month, the baby will drink only milk but after that we can also feed him with the yellow banana or suger cane because their teeth have already come up. The baby can be trained after 2 years depens on their taleuted.

The elephants can eat about 10% for their weight about 400 kgs. For food per day for the big one, 250 litres or 60 gallons for water. But they usuall sleep about 4 hours around 11pm.-4 am. next morning. Elephant are secred animales for thai people. If you have heard about the royal elephant that we have to offering to the King. There are 7 charecteristic basic to tell us that is the royal elephant: white eyes, white skin, white tail, white nail, white palet and white tascle. These depends on the royal elephants spiy that written in the Chot-Cha-Luk book about royal elephant. In this king monarch King Rama 9, he has the royal elephants in his time for 21 together. That is more than the other king in the past. Some of them are in the elephant conseration center by the forestry department and some in the palace in north-east area. Just only one “Phra-Sa-Wate” The bull royal elephant that always stay in “Klai-Kung_Won”palace with his majesty the King.